are an optimal safeguard against not only firearm discharge but also against burglary or attack with the use of sharp tools. Their application in construction is constantly growing on account of security requirements, in the face of the real threat of assaults with the use of firearms and terrorist attacks. Aluminum bulletproof partitions and windows resist bullet discharge from various types of firearms, to which the appropriate classes are assigned as per standard PN-EN 1522 – from FB1 to FB7 for small arms and rifles, and class FSG for hunting firearms. Modern technology combined with ballistic tests makes it possible to manufacture bulletproof aluminum-glass constructions with excellent specifications in practically all classes. The design of aluminum bulletproof windows is based on well-thought-out solutions ensuring continuity of protection against penetration by bullets discharged from firearms at all critical points, such as the glazing, contact between glazing and frame, and profile joints. The construction is based on aluminum profiles with additional chambers for materials absorbing the kinetic energy of projectiles and protecting against penetration. An important element is the glazing, in the form of glass of class BR1-BR7, according to standard PN-EN 1063. A glazing of this type is made using strong PVB films joining panes of tempered glass – this composite is capable of stopping bullets by reducing their momentum on individual layers. Aluminum bulletproof windows and partitions are used in buildings at particular risk of attack using firearms, affording the users of these buildings security: protection against bullets and injury by glass fragments in the case of a construction in the fragment-free variant. 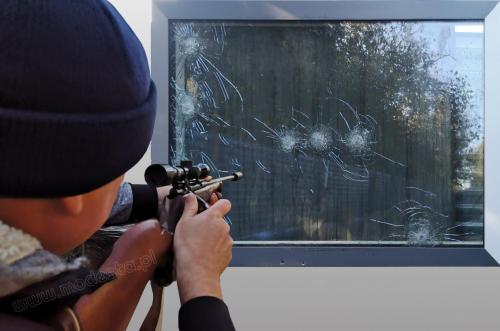 are now made with a completely new glazing variant in collaboration with ballistics experts. Class BR4 bulletproof glass according to PN-EN 1063 has been supplemented with an additional glass layer, reaching class ER2 according to standard PN-EN 13541. In effect, the window glazing is resistant not only to penetration by projectiles fired from firearms but also to the shockwave accompanying detonation of explosive charges. In terms of the varying degrees of expected threat, FB4 bulletproof windows with ER2 glazing are an optimal safeguard against aggression in the form of an attack with the use of tools, discharge from small arms or detonation of an explosive charge.

The filling of windows of this type is tempered glass in a layered configuration. Such glass is made by integrating a pane of tempered glass with polyvinyl butyral film, i.e. PVB. PVB film is ductile yet very resistant to penetration, cutting and tearing. Film of the appropriate thickness joins together panes of tempered glass, giving the glazing a composite structure and thereby ensuring its special functional properties. It is precisely the structure of the glazing, the thickness of individual glass panes and layers of film, as well as the sequence of their arrangement that decide its resistance to manual attack, to explosion and to penetration by a projectile fired from a firearm. In buildings with the highest security standards, glass resistant to both penetration by bullets and to the force of detonation of explosive charges is used. The force of a shockwave generated by detonation of an explosive charge endows great kinetic energy to fragments of walls, objects and glass shards. These objects injure the users of the buildings under attack – most often lethally. According to military experts, the primary cause of death of the victims of bomb attacks are fragments and glass shards occurring following an explosion. These shards and fragments are certainly no less dangerous than bullets fired from firearms and cause many injuries with lethal effect at the time of attack. Glass resistant to detonation of explosive charges is classified into one of four classes defined by standard PN-EN 13541. Classes are sequenced by the symbols ER1, ER2, ER3 and ER4, where ER1 is the weakest and ER4 the strongest. The fundamental criterion for classification of window glazings in the scope of explosion resistance is the force of the shockwave and the duration of its action. Glass resistant to detonation of explosive charges in a given class compliant with PN-EN 13541 does not exhibit damage in the form of rupture, perforation or decoupling from the window frame following explosion.

The design of aluminum bulletproof windows and partitions

is based on reinforced aluminum profiles, which form the window frame, and on glazing with glass of the appropriate specifications. In the case of window frames, reinforcement of aluminum profiles causes projectiles to become deformed or decompose and to lose their kinetic energy. The structure of the glass serving as the glazing also constitutes an effective barrier against projectiles discharged from firearms. The high hardness of tempered glass flattens bullets and removes their point penetration power when they hit the glass. The integrated layer of PVB film or other laminate absorbs the kinetic energy of projectiles and prevents penetration.

Aluminum bulletproof windows and partitions, with glazing, resistant to detonation of explosive charges,

are one of the best and most effective passive safeguards for buildings of special significance. In situations where real threats are present, they protect people against injury or loss of life due to being shot or hit by fragments following an explosion. They are perfectly suited for buildings with a large number of glazings susceptible to attacks with the use of firearms or explosive charges. Bulletproof windows are installed in government administration buildings, diplomatic facilities at risk of terrorist attacks, in courts, banks, post offices and currency exchange offices.